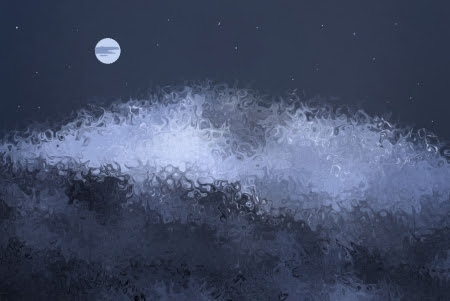 Q U E S T I O N S
Did you see the moon
with its one silver eye
as it controlled the tide?

Did you see the moon
hanging up there naked
with nothing left to hide?

Did you see the moon
glowing full and whole
over that surging sea?

Did you see the moon
and its perfect circle
shining down on me?

Written down straight after looking at the picture, the first line came and I went with it!
Not very polished but a response never the less. :-)
Posted by Susannah at 10:38 5 comments: 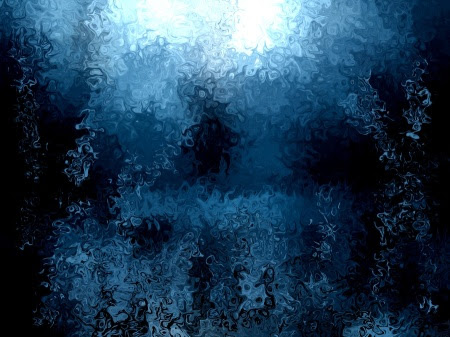 Deep down
beneath the surface
where the forgotten things are kept

Just visible
there in the dark shady depths
they live, awaiting recognition, rememberance

I felt I could see figures and faces in the depths of this picture, and as I think of the subconscious as a vast ocean - I followed that thought. . . It is all there under the surface, just awaiting the light of our consciousness to illuminate it.
Posted by Susannah at 11:05 4 comments:

Down beneath my heavy feet

As soon as I saw this image I thought of stained glass and imagined its reflected light thrown down on the ground beneath my feet, and what an inspirational moment that would be. This, came from that thought. :-)
Posted by Susannah at 10:32 2 comments:

It incensed her to think of it. She could feel the feeling rising up through her body and sitting coiled in her throat, like a serpent ready to strike.

She clamped her jaw shut. Fear now joining the anger. Fear of what might happen if she opened her mouth and unleashed the fury she felt building inside her.

She pushed back her damp hair and squeezed her fists into balls. Her nails were cutting into her palms, causing a necessary distraction, allowing her to keep a lid on this tornado of feeling that was whirling through her body seeking escape.

She heard the skid of car wheels on the gravel drive, and with her face pressed to the window, saw him open the shiny door of his new car and casually, far too casually, saunter toward the front door.

It was then it happened. The storm broke through her defenses and she opened her mouth, threw back her head, and she screamed. The piercing sound rattled around the pink painted room, reverberating back at her as the pitch shifted and became a low mournful howl.

She didn't hear his key in the door or his quiet voice gently calling her name. She was consumed with channeling this whirlwind of feeling up and out of her body.

It was only when she was finally spent that she could feel his soft kisses covering her tear stained face, and empty and hollow she fell like a ragdoll into his waiting arms.

Week 53 of Saturday Centus the prompt is to use up to 100 words (not including the prompt) using the line "I'd like to teach the world to sing..."

We were all sitting down to dinner when he looked at me and with a thoughtful look on his little face, said. "I'd like to teach the world to sing."

It almost took my breath away and my heart just swelled with pride as I thought of his words, I was so pleased that I had raised such a sweet sensitive boy.

"Aw, how lovely darling! Why? So that everyone could be in perfect harmony and learn to participate and co exist?"

Without missing a beat he answered. . . "No, so I didn't have to listen to Amy Reynolds next door practising her blasted scales!"

She had such simple grace, like a blessing bestowed. Tall and thin like a reed, she swayed as she walked and her skirts swished around her ankles like a willow in the wind. She exuded a calm confidence and the aura of one who was grounded and secure in her being and when she spoke, the room quietened, hushed to a whisper as she held them spellbound with her voice. It was pure and clear, and as she sang, the notes were like a bird rising up into a brilliant blue sky.

When she finally fell silent the audience were all of a jitter, sensing they had been witness to something extraordinary. They were already mourning its loss as the reverberations of her voice disappeared into the ether and left them once again alone. These people, who for brief moments had been borne aloft, tranported by the magic that she had bought into the room, were left floundering. Clutching at the feelings that made their mundane world seem lifeless and without colour in comparison.

When she got to her feet to leave, in unison they began a mournfull chant that echoed and rang like a bell. Surging and pounding in its intensity, a dirge that accompanied her to the big wooden doors that marked her exit. One hand on the door, she paused and stood so still it was as though she had been cast in alabaster. Slowly she bought her graceful finger up to her rosebud lips and the ear splitting sound dropped like a stone. The silence was so heavy with expectation it had a palpable weight.

She turned to face them, and stood knee deep in the quiet that had descended. Her shining eyes returned their gaze as she whispered. . . "join with me."

From deep in her throat came a note that split the heavy silence, and energised the air with dancing light. She threw back her head and lifted her arms as the note increased in intensity.

One by one the assembled crowd became a choir, and the room and the people were filled with all they had sensed in her performance earlier, and they were no longer alone.

They were as one and they were magnificent.

She quietly opened the door and slipped away leaving them lost in their rapture, they had no more need of her. They had found their own voices. 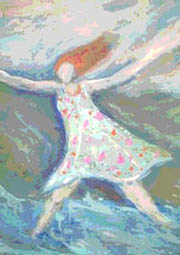